Living on the Mediterranean

All my life I watch my father diving and catching fish. It looks so easy, he puts on his diving suit, flippers and mask, takes the spear gun into his arms and jumps into the sea. After couple of hours he is back with crabs, shells, octopus and fish. Depends of the territory and our wishes, of course :).

I realize it’s not such an easy job, I tried, but he does it with joy and it’s so nice to see his proudly smile when he comes back and show us his catch.  That’s why my sister and I learned how to deal with fish and other seafood when we were just little girls. We use to clean it on rocks near the sea, take it home and prepare it for dinner.  Mmmm….. there is nothing better than fresh seafood my mom prepares.

So Long, and Thanks for All the Fish

Never mind if you live near the sea or not, it’s important for you to know how to tell fish’s quality and freshness when you buy it on the market. If the fish is fresh, its eyes will be clear and exaggerated and its gills bright red. The meat will be hard, there won’t be any hole left when you touch it, and the skin shiny. If you smell it, you will sense the smell of sea, by no means the acid smell. Also, if all the fish are the same size, there is a bigger probability that they are grown in the fish farm.

In Adriatic Sea we have two different types of squid, calamari and totans. That’s good to know ’cause there is a big difference in meat quality (calamari are more esteemed and tastier), so don’t let them fool you. There’s also a big difference in their price. Totans have small, triangle fin and their head, arms and tentacles are bigger than the one calamari have. Their colour is more red while calamari are pale with more meat and fin that goes from bottom to the top of the mantle. Adriatic calamari are a little bit tough, especially when you compare it to the one you buy frozen in a supermarket, so tourists often complain in the restaurant. But in fact they are more expensive and they taste so much better. I suppose people are just use to the frozen soft one.

Why Portugal Cork Oak is so Important to Us

Everyone likes octopus, well, at least everyone I know. If the octopus has sea smell, it’s wet without mucus and the meat is tough, then you can be sure it’s fresh.

And have you heard that the octopus will be softer if it’s boiled in water with a cork stopper? It’s written in many cookbooks all over the Mediterranean countries with no explanation why. Some say that the cork stopper beats the octopus meat while the water is boiling… Hmm, doesn’t seem so likely. It’s not known how this myth came into our culture (maybe the Portuguese spread it) but respecting my ancestry I always put a cork top in my pot while cooking an octopus. It’s just a right way to do it, don’t ask why 🙂

We have a lot of different shells in Adriatic Sea. Some of them you can find buried in the sand, others attached to the rock or just laid down on the bottom of the sea. I adore all of them; date mussels, pippies, oysters, scallops…. Even the murex rock snail. 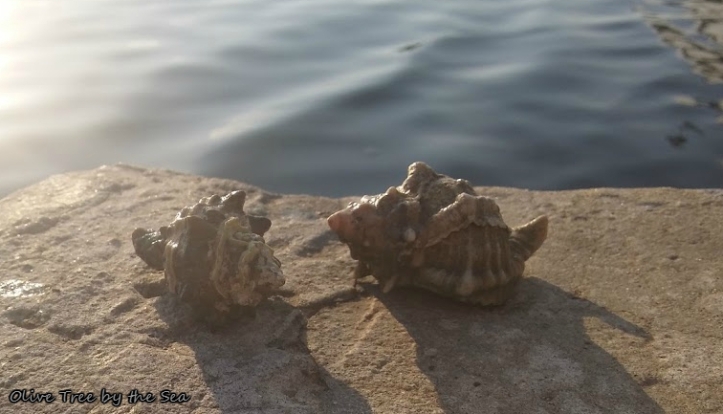 It’s very important to make sure your shells are fresh and alive when you buy them. First check the smell. If they are fresh they will always be a little bit open and when you touch them they will instantly close. Throw away all the shells that aren’t open after boiling, they might be rotten. Make sure you cover them with wet dishtowel and put them in the shadow if you don’t plan to cook right away.

Mmmm… What am I going to do tomorrow?

I think I am going to pick some seashells! 😉

This blog is all about Istria and mediterranean lifestyle… sea adventures, tasty food and relaxed living.

We are two sisters and we’ll share our life adventures with you!

Mussels… From Sea to Your Belly

Tuna Steak on a Plate

A plate of grilled anchovies